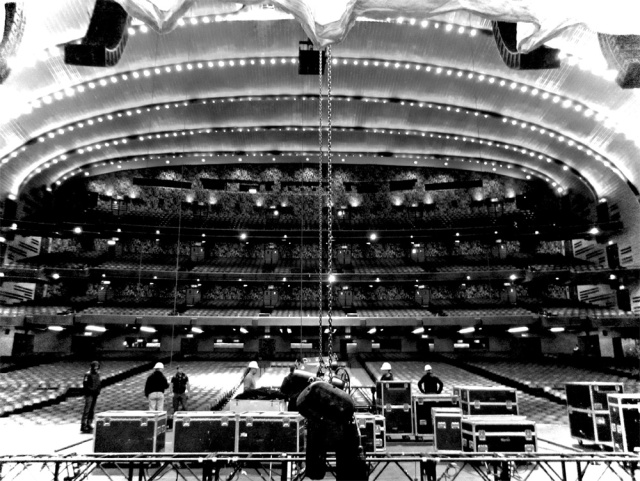 It was back to business after a great triplet of easy days in Manhattan. A brisk walk took me to the great Radio City this morning, where things were going just a wee bit slow. It’s Local 1 today; if IATSE Union Crews was a video game, Local 1 would be a ‘boss’. I recall early days of touring, somewhat indignant about having to defer almost entirely to the local hands; after all, I know the gear more intimately than they, who are these inpterlopers to give me a hard time for daring to push my own cases and such? Well, that was years ago and I now I don’t really mind at all. The key is to be nice, and let them do their thing. The philosophy behind setting up in a strict union house goes a little like this: ‘Relax, there’s no rush, we have time.’

It might interest the reader to know that when playing Radio City, the regular tour laminate, our ‘go anywhere’ pass, is of no significance to the house. Radio City issues a special pass, good only for the dates the artist is performing; for the next artist here, the passes will be something different to ours.

A glorious hole in the fabric of today’s blanket of professionalism comes in the form of absent terminology: “important show”. For once, playing a big city, I don’t get the vibe that this is an all-important, do-or-die show. Occasionally, when playing big centres of humanity, there is a distinct feeling of nerves which can diffuse from the higher vapours of managerial ether; all previous shows worked and performed hitherto vanish into an infinite perspective compared to “important shows” like New York, Los Angeles, London, Tokyo, etc. But for a reason, whose origin is unknown and unimportant to me, there is no such feeling today. We are simply allowed to get on with our jobs, doing them as we normally do — shockingly terrible. (Kidding.)

Our rugs and carpets needed to be fire-proofed this morning, and thankfully it was a simple task for us. We simply let the stagehands deal with the heaving and rolling, laying, spraying, and half-drying of the floor-quilts down in the basement, before moving them upstairs again while still damp. If it weren’t for the looming dark stage, I’d have happily let the coverings dry a little longer, but we must pursue a tight course today.

The dark stage is serious business with Local 1. When all the hands are on break, so is everyone else. Today we have three dark stages: from 10am to 10.15, 1pm to 2, and 6pm to 7.30. Of course if we wanted to keep crews busy all day we could, it would just cost more; you could say the dark stage benefits us more than Local 1. The dark causes no dramas for The Winning Team, but the downtime impacted a small nugget of consequence unto our audio team; they needed some extra minutes to get everything right, but in the big scheme, we finished soundcheck well before the 6pm cutoff.

Come 6pm I sat in the green room working on some photos and writing while Bassman Pat took some notes listening to recordings of the show. Before stage time, I chatted briefly with Pat in the wing, and we touched on his position within the group. He says he’s ready to jump in should the need arise. I’m impressed; to be organised after witnessing one show and listening to some recordings, he’s got to be good. While shooting the breeze, I hear on my radio that the crowd aren’t getting into their seats fast enough, and after a fifteen minute delay (which has become the norm) there is need of a further five just to minimise the audience disruption when the show begins. Pat said it’s funny that of all places, New York should be the gig in which no one’s in a hurry.

Shortly after, and for the first time in my history as a touring technician, I get a very unique call on the radio. From whom I will not say, but the order is clear: ‘Go out there and pretend something’s wrong.’
I respond quite dryly; ‘Are you fucking serious?’
To make it appear as if there was some technical difficulty keeping us from our stage time, I wandered on stage like a lost sheep, eyes fixed on the man in the opposite wing doling out such a preposterous order. I touched a guitar, pressed a few buttons and after thirty seconds of pantomime, breathed a whisper to myself: ‘Oscar’, then disappeared off stage.

At my position in the stage-left wing, hidden between drapes from the majority of the audience, it was a quiet affair. With all the fabric around me acting as acoustic baffling, the roaring, welcoming crowd sounded more reserved than I think they were. If that last sentence made any sense, I’ll be surprised.

It’s unfortunate for me to report: technically, it was an uninteresting show; but that means everything transpired as it was designed. In the wings, we’re still using the Tampa set list from 7 shows, 19 days ago. In truth, I am beginning to forget the playlist in terms of song names; instead of remembering the order of the set through titles, I just know which guitar comes next. In the instances of dark between songs, when Mitch might ask, ‘What’s next?’ I shrug my shoulders and answer, ‘I dunno, but you play this,’ handing him the correct guitar for the upcoming song.

For the final song of the evening, Closing Time, the audience are out of their seats and clapping vigorously in time to the music, a chance to stretch their legs and flap their wings after two 90-minute sets. With a show here tomorrow, there’s no load-out tonight, and it’s a quick tidy-up, covering guitars and amps. The stage adopts a moonbase stasis visage, with silver blankets repelling dust from the precious earth artefacts.

Back at the hotel, Dan and I share an elevator. Before alighting at the eighth floor, he swivels his head mechanically, silently, maniacally, and presses buttons corresponding to the ninth, tenth, eleventh, twelfth, fourteenth, fifteenth, sixteenth, seventeenth, eighteenth, and nineteenth floors. As I curse him for this calculated delay in my upward journey to twenty, he skips out of the vertical transport; his bald head moves laterally with the shrinking space beyond the closing lift door. With a syrupy, insidious grin, his final words of the night were ‘Call me when you get in.’ I am so gonna get him for this. 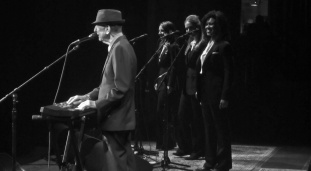 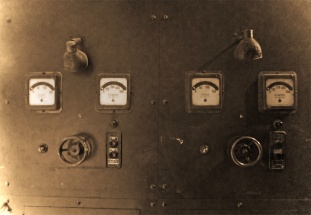 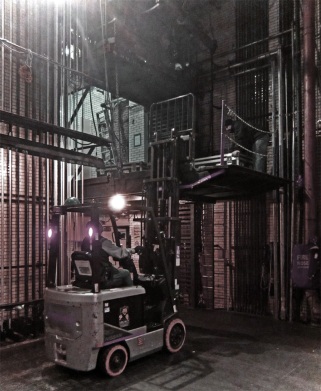 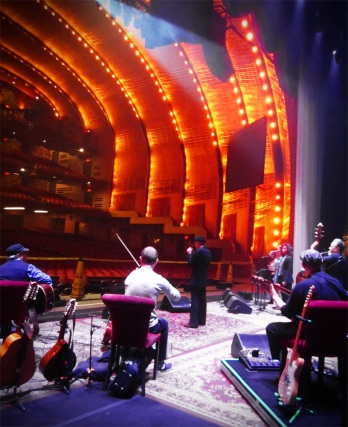 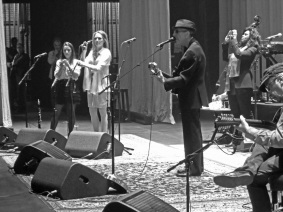 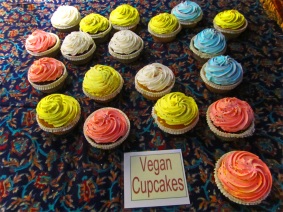 3 Responses to Apr 6: Radio City I